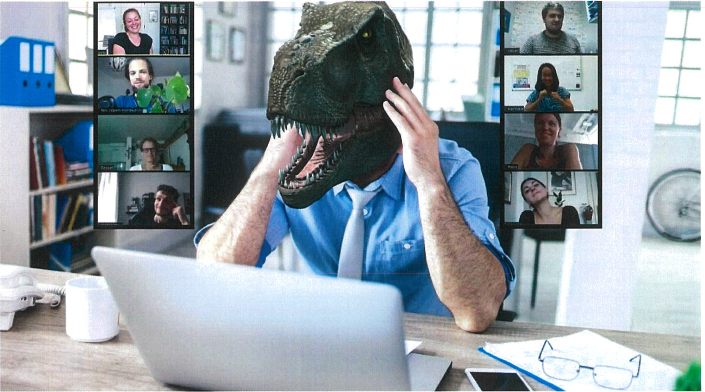 First, a bit of context.

Fast forward to 16th March 2020. The Prime Minister announced that the Movement Control Order (‘MCO’) was to begin on 18th March 2020. Offices were compelled to close.

One of my partners suggested to me that we should have a lawyers’ meeting by Zoom since we could no longer have physical meetings. My reaction was to ask, “What is Zoom?”.

At first the MCO was for one week so I thought maybe we could KIV the Zoom thing. I also didn’t want to have a virtual meeting that didn’t come with savoury snacks, which were always the highlight of our face-to-face
office meetings.

Then the MCO was extended…… Realising that I had to find some way to “meet” my lawyers, I asked how much it would cost and what equipment was required for Zoom. When the answer was “it’s free for 45 mins and can be done on existing handphone, tab, laptop or desktop computer” I gave the go ahead.

At the first office Zoom meeting I heard the phrase “you have to unmute”. I heard it many times that day, but nobody heard me as I didn’t know how to unmute. By the 2nd Meeting I had learned how to unmute.

Initially Zoom was meant to be temporary just to keep in touch with our staff. We all expected to go back to “normal” pretty soon.

The Honourable Chief Justice of Malaysia, YAA Tun Tengku Maimun Tuan Mat, as well as Her Ladyship’s predecessor, YAA Tan Sri Richard Malanjum had long been proponents of embracing technology including video technology. Like many if not most “old” lawyers, I had read their various statements on the matter, but my attitude was “it’s good for the young lawyers to learn all this technology stuff but nothing will change until after I retire so no need for me to strain”.

Yet despite efforts to ignore it, technology was inexorably creeping up on me.

Sometime ago, the Courts had introduced this thing called “e-filing”. In “Philadelphia Story”, Tom Hanks, had filed an important court pleading by e-filing but somehow it hadn’t reached the court’s electronic register and that failure was used as a reason to sack him when the real reason was that he had AIDS. Ever since then, I had decided never to trust e-filing. I was vaguely aware that it was going on in my office, but I don’t really remember when we started e-filing or even when we could no longer file the old-fashioned way. It was only during the MCO that suddenly I realised that e-filing had become an essential tool. We couldn’t go on without e-filing. Now, we all had to file documents like Tom Hanks.

Then, there was “e-review”. I can’t remember when the courts introduced it. One day I saw one of my young lawyers “playing” with her handphone when she was meant to be assisting me in a trial. I leaned over to reprimand her, and she whispered that she was “doing an e-review” in another court. I pretended to understand and whispered back “ok, carry on” then forgot about it.

One morning during lockdown, the Court of Appeal live streamed a matter over video. I remember watching with mixed feelings one of which was horror. Horror because I realised that if I was ever to do a video hearing,
I would have to learn how to angle the camera properly. I wasn’t convinced. Maybe we could just wait it out. Just in case I started watching interviews on CNN and Sky News to see how they did it.

Truth be told I never paid much attention to this electronic stuff going on in the background around me but then when MCO became CMCO and we were allowed to go back to office, everything changed.

That was when the proverbial penny dropped.

Around that time, while working through SOPs to re-open our office, we
realised that our lawyers could avoid exposure to the virus and yet still
“appear” in court if we made video available to them in the office. This
was a huge realisation. We had strict office SOPs and “WFH” rotation but
the weakness in the system was we still had to “go to court”. Suddenly
providing Zoom “court” facilities to keep our lawyers safe made sense.

Somehow, it all began to make sense.

Being completely ignorant as to how to “set up”, I did the sensible thing,
which was to call my son, Toby, and ask him to handle it. Apart from being a lawyer himself, he is an avid video gamer and You Tuber. Sure enough, he knew exactly what to do and better still, knew how to do it on a shoestring MCO budget. Before long we had three Conference Rooms set up with giant TV screens, cameras and microphones.

Since the court has started offering video hearings, we have grabbed the opportunity to conduct hearings at every level and of every type across the country – all from the safety and comfort of our Conference Rooms. Our first full trial with overseas witnesses has just been fixed. Exciting times ahead!

If there’s one piece of advice I would give to anyone handling litigation by video it would be to set up with a big screen with a proper microphone and camera. Speaking for myself, conducting a hearing and meetings via a big screen with a separate camera and mic compared with doing so via a laptop is as different as night and day. Screen sharing documents on a big screen is no longer a test of eyesight. Moving the camera on its stand enables 3 people to appear on screen sitting around a conference table socially distanced instead of cramped round a laptop breathing on each other. Most important the right camera angle is no problem.

I find that it helps to get in the right frame of mind that our conference rooms are a short walk down a corridor to a section cut off from the main office. The short walk helps generate the “feeling” of “going to court”. I can even carry a bag if a want to. It feels we are leaving the office and going to court and somehow this feels “right”.

By the way, it may also surprise some that I have not had an inperson
meeting with anyone since the MCO started in March 2020. That’s 2020 not 2021. This is the same person who didn’t know what Zoom was last year.

Since the first MCO, our SOP has been not to have face to face meetings in our office or any clients’ offices. We have not changed that SOP. I have had countless productive meetings by Zoom from my home, my office, my car and my patio. Yesterday I moved seamlessly from a Zoom hearing in Putrajaya, to Zoom meetings all over Malaysia and overseas all on the same one day without leaving my office. I never realised how convenient all this technology actually was!

The other day I had a hearing fixed in another state. My opponent had insisted on fixing a physical hearing. As the day approached, I realised that I was actually angry that my opponent was insisting….. he was substantially younger than me but somehow had not “read the memo”. The thought of having to go to the police station to get a letter of permission and then waking up at 6 am to drive outstation filled me not just with dread but actual anger. Why did a fellow lawyer insist on putting us all in danger and also wasting our time? Then two days before the hearing, my associate told me that it had been converted to a video hearing. Under the new rules, following the CJM’s circular, the Judge had exercised discretion to refix all civil matters by Zoom. I have to admit that I let out a small cheer and anger was replaced by relief and even a little happiness. Happiness at a video hearing. It seemed right that the hearing should be by video. The world was suddenly a better place. Was I finally a part of the Zoom Age? Stranger things have happened.

For one case which was carrying on before the MCO we needed 14 packing boxes and a lorry to take the documents to court. The case has been jammed as the only remaining witnesses are locked down overseas.
Our case will now soon proceed by Zoom with the witnesses testifying by Zoom from a secure location in their own countries where incidentally lockdown was just extended due to the “4th wave”. The boxes will be
“transported” by trolly down the corridor to our video room instead of to Court in a lorry.

Of course video hearings are “not the same”. A real litigator goes to court. A real litigator doesn’t sit in the office. But recently I read an interview given by Datuk Seri Gopal Seri Ram. If anyone should be fighting against video hearings it should be Datuk Seri GSR, the consummate court room lawyer. But in his interview, Datuk Seri GSR not only said he has conducted video hearings, but he even went on to say that he enjoys the fact he can do them from the comfort of his office. Somehow reading those words coming from one of the great court lawyers made me feel good. It may still be possible to be a litigator from the comfort of an office. Of course, it is not the same but who’s to say it won’t be better?

In my office building we have a small café that makes great coffee. I can do a case with the aroma of freshly brewed coffee wafting around while sitting in my comfy office chair. No comfy chairs or coffee in court.

And finally, after a long day “in court” all I have to do is close my laptop, turn off the giant screen in front of me and take the short walk down the corridor back to my office. No boxes, bags, or long drive through a jam.
It’s not the same. Its better.

Maybe this dinosaur might put off extinction for a while.